JOIN US IN CHURCH OR ONLINE! 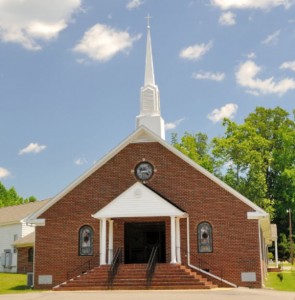 According to early records kept by the New Kent County Courthouse, and information passed down through generations of members, the church was founded and organized by Rev. Dandridge Patterson in 1867.  It was named “New Elam” after the “Old Elam Baptist Church” of Charles City County, VA.

The first services were held in what is known as a “brush arbor” type of church.  This later evolved to a log cabin.  The first framed structure was built in the late 1870’s.  On March 5, 1878, a deed for approximately one acre of land was secured from Susan Toler by Isaac Brian, a church trustee, for the amount of twenty dollars.  Those serving as Pastor in the first framed structure were named as the Reverends Thomas Bailey, Anthony Johnson, Frank Mitchell, and W.D. Harris.  The church was also used as the first school house in the community.  It was later purchased and demolished by the late Deacon George Meades for his personal use.

The original sanctuary, erected in 1911, was built under the leadership of Rev. S.W. Harris of Norfolk, VA.  The first cornerstone was laid in 1912.  When the stone was laid, the church was facing the Old Cumberland New Kent Road, which is now the rear of the building.  Rev. Harris served faithfully for fourteen years.  The pastors succeeding Rev. Harris were named as Reverends P.L. Henly, J.O. Wright and McCall.  There were also others who lead the congregation for short periods of time.  It is recorded that the first marriage performed in the church was in the year of 1912 between Etla Harris and Albert Dixon.

In 1934, Rev. William M. Jones was installed as pastor.  Under his leadership, the pulpit and choir stand were rearranged.  Many other structural improvements were made such as roofing, paneling, carpeting, aluminum siding, and additional rooms.  The church was also electrically equipped, and a furnace and air conditioners were installed.  A second cornerstone was laid in 1950 facing the new Cumberland and Courthouse Road, which is now the front of the church.  The first cornerstone was also moved to this location of the building. 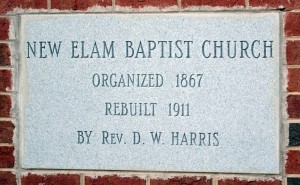 In May of 1950, Robert Charles Krug and family, along with Clarence Turner gave the church two aces of land for the enlargement of the cemetery.

When Rev. Jones’ health began to fail, other ministers stepped in to help with Sunday morning services.  Those ministers were Reverends Meade Walker, Parker Taylor, and Dano Armstrong.  In 1979, Rev. Jones was called from his labor to reward.  He had served New Elam faithfully for forty-four years.

On September 16, 1980 Rev. Dano Armstrong was elected as pastor.  Under his leadership, the interior of the church was improved with new pews, a baptismal pool, carpeting, and a new PA system.  Structural additions to the building were the fellowship hall, kitchen, pastor’s study, two restrooms, central air, and heat, and a handicapped ramp.  A new roof was also installed on the sanctuary.  Rev. Armstrong served faithfully for nine years.

On November 16, 1990, Rev. Charles E. Goodman was elected pastor.  Under his leadership, many ministries were reinstated and developed; Sunday School/Bible/Study and Wednesday Night Prayer and Praise Services with Bible Study.  Additional improvements were made to the church such as insulated windows, and the remodeling of restrooms, kitchen, and secretary’s office. 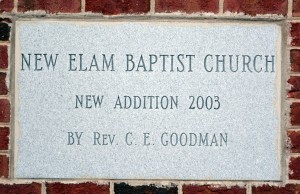 He also activated the Pastor’s Aid Club, Churches’ Aid, and Single Women’s Bible Study.  One of Pastor Goodman’s visions for the growth of New Elam was to build a new church.   In 2003, New Elam was blessed with the completion of a beautiful new Sanctuary, including a Pastor’s and 1st Lady’s Suite, Deacons/Trustees and Choir Room, new Secretary’s office, 2 classrooms and 4 new restrooms.  The construction plan attached the new sanctuary to the old edifice, which is now used as a banquet/multi-purpose facility.  A new cornerstone was laid in 2003.  Rev. Goodman served New Elam faithfully for 16 years.

On September 12, 2010 Rev. Kelvin L. Paige was installed as Pastor.  Under his leadership the New Elam Combined Choir, the “True Men of God” Men’s Ministry, and several other ministries have been revived.

On January 1, 2018 Rev. Leslie C. Venable Jr.  was called as Pastor. We are excited about this new era of progress in the life of the congregation as we dedicate ourselves to service in the community and giving glory to God.